Taking a bite out of clutter (and “I organize dead people!”) 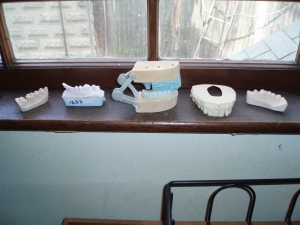 Tooth casts by client's dentist. Artistic arrangement by me.

I found these plaster tooth casts in a small drawer in the client’s front entryway. You never know when you’ll have to dash out the door to an emergency orthodontist appointment. I suggested arranging them on the windowsill as an avant garde art piece, but the client has since put them away. *sigh*

The casts aren’t going to be used again (I don’t think), but I can see why one might be reluctant to toss something like this. It’s a portrait, of sorts; individual and unique. They remain owned and cherished in Melrose, MA.

More recently, I also found an actual set of false teeth, from someone who had recently passed away; they were buried with the former owner’s cremated remains.

Incidentally, cremated remains (in boxes and urns) are so far the weirdest thing I have ever had to organize. Should the Box of Mom be kept in a cabinet with her photograph albums? Should the Box of Mom be kept out on the shelf so the client remembers to send some of her ashes to other relatives? But in the end, I guess cremated remains are stuff, like any other stuff, as people are created from stuff and become different stuff when they die. From dust to dust. And they’re “utterly useless” from a utilitarian perspective, but also more important to the client than any other stuff they own.